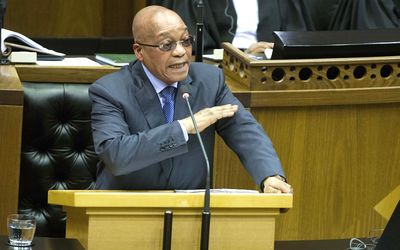 PRESIDENT Jacob Zuma and his supporters managed to railroad the African National Congress’ (ANC) executive into toning down strident criticism of the Gupta family and its influence on Mr Zuma.

After a week of disclosures of the family’s apparent reach into the Cabinet and an exposé by Deputy Finance Minister Mcebisi Jonas effectively accusing Mr Zuma of violating the Constitution, the ANC was expected to take decisive action.

Instead, the office of secretary-general Gwede Mantashe will investigate the claims. And the top six officials — most likely led by Mr Zuma — are this week expected to meet the Gupta family to discuss allegations that its members have undue access to the president.

On Monday, a meeting has been set with the Gupta’s media division, ANN7 and The New Age.

ANC spokesman Zizi Kodwa could on Monday not confirm the date and venue of the meeting with the family. Mr Kodwa said the officials were carrying out a mandate of the executive that they “must continue to interact with the Gupta family, given the seriousness of the allegations (of their involvement in political appointments).”

He said this was a follow-up to a meeting held with the family last month.

On Sunday, Mr Mantashe said the meeting was necessary because the controversy surrounding the family’s political influence refused to die.

“If they are in the space with us and their name keeps popping up around the ANC, then the ANC will have to engage that reality,” he said.

It is understood that Mr Zuma defended his relationship with the family in his closing remarks to the meeting.

The president again spoke about how the Guptas came to the aid of his son, Duduzane, when he was starting his career. He said the Guptas were not the only family that influenced politics in SA.

Another source said Mr Zuma had “refuted and denied” in the meeting allegations of the family’s undue influence.

Mr Mantashe, during a briefing, said the children of politicians should not be denied opportunities because their parents were “activists”.

However, he said it became a concern “when that relationship begins to impact on the ANC”.

Last week, the South African Communist Party (SACP) and ANC insiders said a Cabinet reshuffle was imminent and Mr Jonas was likely to be moved out of the finance portfolio to make way for MP Sfiso Buthelezi.

The rand weakened last week after the Hawks threatened Mr Gordhan with legal action, with investors raising questions about the security of Mr Gordhan’s position even as the country faces a rating downgrade.

All the ANC said was that it had confidence in Mr Gordhan. It was unclear whether Mr Zuma had made headway in his mediation between the two.

On South African Airways (SAA), the ANC said there needed to be “improved governance”. Intense disagreements between SAA board chairwoman Dudu Myeni and axed finance minister Nhlanhla Nene over a fleet contract, are understood to have contributed to Mr Nene’s firing. Ms Myeni is a close friend of Mr Zuma.

In the wake of Mr Jonas’s disclosure that the Guptas offered him the job of finance minister before Mr Nene’s firing in December, Mr Mantashe warned of SA descending into a “mafia state” run by oligarchs. Ahead of the executive meeting, he described Mr Zuma as “not untouchable” and questioned Mineral Resources Minister Mosebenzi Zwane’s role in securing a mining deal for the Guptas.

After the meeting Mr Mantashe said his office would listen to and investigate the claims against the Guptas.

The SACP reiterated on Monday its call for a judicial commission of inquiry into the matter, but also urged affected leaders to take part in the ANC-initiated process.

“It cannot be correct for some elements to use their positions of leadership to prioritise defending one single family — and its acquaintances — that is amassing wealth from a web of relationships and decisions made in state institutions,” SACP second deputy general secretary Solly Mapaila told a Southern African Clothing and Textiles Workers’ Union conference in Cape Town.