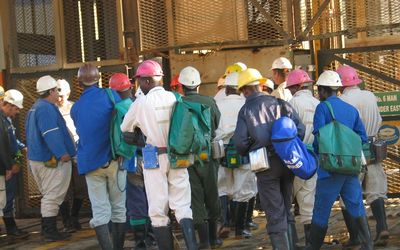 Goldfields has re-engaged workers who were laid off at its Damang mine.

The company tells Citi Business News it has been able to transfer the about 400 workers who had to be laid off following impacts of developments within the mining industry.

“We have retrenched some workers but most of those workers have been absorbed by mining contractors who are providing us with business. So in fact the number of those people who have not been accommodated is actually quite low and I don’t think there have been wholesale loss of jobs here, the loss of jobs has being very minimal because we have been able to transfer those people across to the contractor.” He said.

Goldfields Ghana Limited has promised not to lay off anymore workers, but rather the mining firm is said to be working hard to find practical solutions to the problem.

Meanwhile Goldfields has promised not to lay off anymore workers in spite of the falling price of gold on the world market and the challenges facing mining companies operating in Ghana. The company says it is rather working hard to find practical solutions to the problem.

“We can never make assurances because we don’t know what is going to happen to the global prices of the gold price because we don’t have any control over that. But we’re going to work very hard to try and prevent that as that is up and almost in our minds. We’re going to work very hard to come up with the solution that ensures the sustainability of the mine long into the future. That is what we want to do and protect jobs and protect the contributions that we make into the economy,” Nick Holland explained.

Meanwhile government has granted tax and royalty concessions to Gold Fields Ghana Limited which is to save the mining firm some 33 million dollars yearly which is to feed into its deliberations about the future of its Damang mine.

Goldfields between 2014 and 2015 alone laid off more than 500 employees and had announced it would lay off over 200 more this year if the economic status quo does not improve.