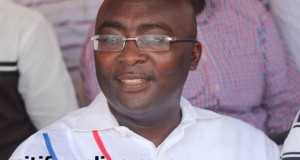 Government has denied claims by the 2016 running mate to Nana Akuffo Addo, Dr. Mahamudu Bawumia that it has diverted state funds for electoral gains.

According to government, assertions that some idle funds belonging to the Ghana Infrastructure Investment Fund (GIIF) have been deposited into a private account to meet campaign expenditure are unfounded.

Dr. Mahamudu Bawumia told a gathering of students at the Accra Polytechnic last Thursday that government had directed about 250 million dollars of the total proceeds from the $ 1 billion Eurobond it issued in 2015 to a private account.

He doubted government’s conduct since he considered the Fund was not yet operational.

But addressing the media on Monday, Finance Minister Seth Tekper assured that, “the US$250 million seed money to GIIF lodged by the Board with a Commercial Bank is safe and has already started bearing interest to the idle Fund.”

Read the full statement by the Finance Ministry below;

PRESS RELEASE – REBUTTAL TO DR. BAWUMIA’S STATEMENT ON THE EUROBOND AND THE GHANA INFRASTRUCTURE INVESTMENT FUND

3. We note that the passage of the Ghana Infrastructure Investment Fund Act, 2014 (Act 877) established a Fund which is owned by the Republic of Ghana to mobilise, manage, coordinate and provide financial resources for investment in a diversified portfolio of infrastructure projects in Ghana for national development.

4. Section 5 of the Act provides for the sources of money for the Fund, which includes a portion of the Annual Budget Funding Amount (ABFA) from of the oil revenue; and moneys borrowed and raised from local and international capital market or from its affiliates. Further, as noted, a portion of the Bond proceeds was given as seed money to GIIF.

5. Furthermore, the Fund is mandated by Section 3 of the law to invest in, purchase, maintain and realize any investment of any kind.

6. Consequently, GIIF is set up as Sovereign Wealth Fund and it’s a Statutory Fund just like the District Assemblies Common Fund (DACF), Ghana Education Trust Fund (GETFund) and the National Health Insurance Fund (NHIF) and is by law operationally independent.

7. The Funds of GIIF are, therefore, not to be comingled with central government funds.

8. The Board of the GIIF has been inaugurated with the Ag. CEO in place the Fund is in operation. The administrative processes for its full operation has begun and an Ag. CEO has been appointed.

9. Following from the above facts, a key strategy of GIIF is to use its resources to leverage investor funds for accelerated infrastructure development. It is in line with this that the Government allocated an amount of US$ 250.0 million as a seed fund for the GIIF in 2014 and not in 2015 as stated by Dr. Bawumia.

10. Accordingly, the Board which has the powers under Section 3 of the Act to manage and invest contributions made to the fund and to reinvest into the fund to generate returns could put its resources in a commercial bank for the sole purpose of investment.

11. Section 3 of the Act also confirms the provision in Section 21(2) of the Financial Administration Act that makes provision for the investment of public money in securities.

12. Consequently, the funds which goes into GIIFs Account in any Commercial Bank, cannot be misapplied for election purposes. Rather, any idle fund will earn interest to support infrastructure development of the country.

USE OF EUROBOND PROCEEDS

14. In a related development, Dr. Mahamudu Bawumia is mixing operations of the Eurobond funding in both 2014 and 2015.

17. We may recall that as part of the IMF Extended Credit Facility Programme, The Bank of Ghana would no more finance Government budget deficit. This is what we call the zero financing of the budget by the Central Bank. Consequently, Government’s strategy to manage the financing of the budget is to explore alternative financing instruments. One of the strategies is the earning of interests on Government’s own idle funds in the Banks. Following from this, a number of Request for Proposals (RFPs) and stakeholder engagements have been held to implement this strategy.

18. In conclusion, we wish to assure all Ghanaians that the US$250 million seed money to GIIF lodged by the Board with a Commercial Bank is safe and has already started bearing interest to the idle Fund.

19. It must be noted that Ghana now sources for some of its financing from the international capital market. The market has stringent rules and international law backing these transactions.

20. It should be note that misinformation of Ghanaians and the international community in this manner, creates uncertainty in the minds of investors and could damage the appetite for Ghana bonds and such misinformation should cease.

As we strive to develop this dear nation of ours, it would be important to either cross check facts or understand the civic responsibility of every Ghanaian to ensure that the best interest for the