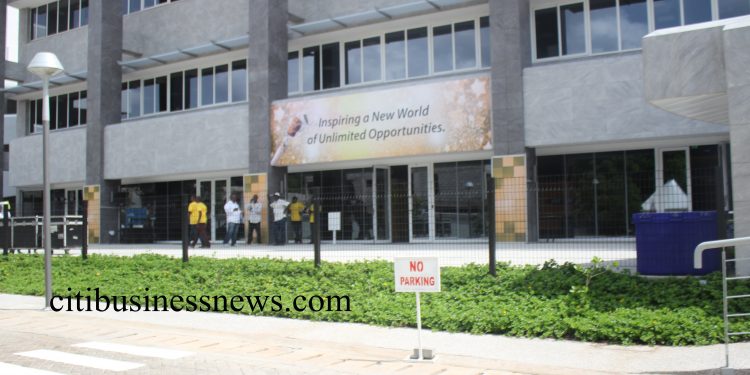 Telecom Giant MTN has ruled out any move to layoff any of its workers despite an increase in layoff figures in the telecom industry this year -2016.

The industry in the latter part of 2015 and early this year was hit with major layoffs as telecom companies restructured to stay in business.

[contextly_sidebar id=”tzmESMecjGU8Ii0vTLYdGCVhzGAIYCBN”]The industry which employs over 5,000 people directly, and about 1.5 million people indirectly has been struggling for some time. Majority of the operators are unable to break even, let alone make profits.

Ghana’s recent power crisis and hikes in utility tariffs is reported to have eaten away a chunk of the revenue of telecom companies while sim box fraud, low penetration of data, cedi depreciation, forex volatilities  among others have hit hard on the operations of telcos.

The industry in the latter part of 2015 and early 2016 was hit with  major layoffs and resignations as telecom companies restructured to stay in business.

Workers of three of the operators in the industry namely Tigo, Airtel and Surfline have so far been the worst hit by the layoffs.

Airtel Ghana for example late last year laid off a number of its workers in what  was described as a restructuring exercise.

Though it still remains unclear, which arms of the company were affected and how many people were  made to go home, Citi Business News checks reveled majority of the workers left by the end of January, 2016.

Aitel Ghana is not the only telecom operator to have made that move, Tigo Ghana in February, 2016 sent scores of its workers home following a major restructuring exercise.

The dismissals affected the company’s commercial, marketing, call centre, PR, HR and procurement wings among others.

Another company that has had to let some of its workers go home this year is surfline.

The company’s customer service wing has so far been the most affected by the layoffs.

“I must say when it comes to lay-offs, it depends on where businesses are heading to and what they seek to achieve.

“We are not envisaging anything like that now. What we have tried to do as an organization is stay competitive, stay innovative and find alternatives for employee. As the business evolves you train and develop people, as well as equip them for the future”.

She further advised business leaders to stay focused and generate various measures that will keep companies running even in difficult economic times.

“When economic times are tough, businesses have other options and other ways of managing the personnel base or the human resource base. Some businesses choose to evolve and do different things; some people eventually do not find their feet. But more importantly, its thinking ahead of the times, ensuring that you are always ahead of what the market trends look like. Obviously if the business is looking ahead and planning, you should envisage some of these trends coming through and plan adequately for such.

Businesses adopt different approaches when it comes to people management in difficult times so lay-offs don’t always come out as the final result in difficult economic times”.

Meanwhile, the programme dubbed “HR Interactive” was set up to encourage best HR practice in organizations and to create a networking platform for participants and stakeholders in the world of work.

This year’s theme dubbed “ Technology driven HR” is aimed at helping the human resource sector understand and employ various technologies available, to develop the staff as well as increase productivity in the business realm.

CEO of HR Focus Magazine, Dr. Mrs. Ellen Hagan in her speech added that the platform is geared towards giving organizations and individuals the opportunity to learn and receive insights that will contribute to making their career a success.