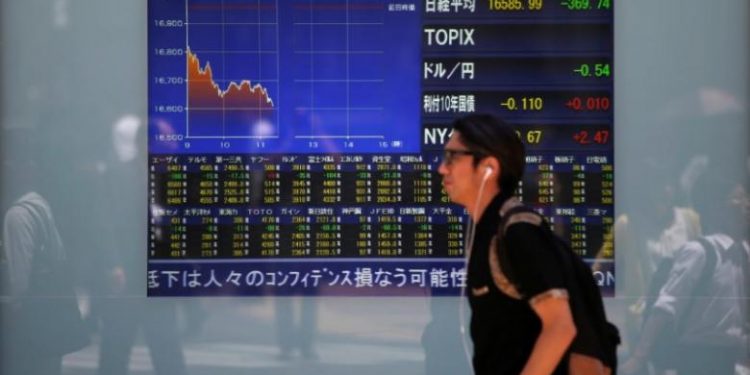 A man walks in front of a screen showing today's movements of Nikkei share average outside a brokerage in Tokyo, Japan, June 2, 2016. REUTERS/Issei Kato

Asian shares rose to two-month highs on Wednesday as investors looked to President-elect Donald Trump’s news conference later in the day for clues on his policies on taxes, fiscal spending, international trade and currencies.

While Trump’s election campaign calls for tax cuts and more infrastructure spending have boosted U.S. shares and the dollar, his protectionist statements and a flurry of off-the-cuff Tweets have kept many investors on edge.

ADVERTISEMENT
MSCI’s broadest index of Asia-Pacific shares outside Japan rose 0.5 percent, essentially returning to where it was just before the Nov. 8 U.S. presidential election. It has recovered from post-election losses of over 5 percent.

On Wall Street, the S&P 500 ended flat on Tuesday as investors looked to the start of the earnings season this week to assess if record market levels are justified, following a 5 percent gain since the election.

“There are underlying expectations that Trump’s tax cuts and infrastructure spending will boost the U.S. economy, which should support markets,” said Masahiro Ichikawa, senior strategist at Sumitomo Mitsui Asset Management.

“On the other hand, if he takes a hard line stance on China in line with his campaign promises, then China would probably take counter-measures, raising concerns about tensions between the U.S. and China,” he added.

Trump has vowed to label China a currency manipulator on his first day in office on Jan. 20 and has threatened to slap huge tariffs on imports from China.U.S. House of Representatives Speaker Paul Ryan and top members of President-elect Donald Trump’s transition team are discussing a controversial plan to tax imports.

The Mexican peso is taking the brunt of such concerns, hitting a record low on Tuesday.

Trump has attacked automakers for building vehicles in Mexico for export to the United States, forcing some of them to consider changing their investment plans in Mexico.

“Mexico has been targeted… It looks hard for Mexico to attract investments in the medium term,” said Yukino Yamada, senior strategist at Daiwa Securities.

The peso has lost 16 percent of its value against the dollar since Trump was elected.

The U.S. currency lost some of its steam against most other currencies as U.S. bond yields have come down, reducing the dollar’s yield allure.

Bucking the trend was the British pound, which wobbled at $1.2166, having hit a 2-1/2-month low of $1.2107 on Tuesday, pressured by UK Prime Minister Theresa May saying she was not interested in Britain keeping “bits” of its EU membership.

That fuelled fears she was setting the course for a “hard Brexit” in which immigration control is prioritised over retaining access to the EU’s lucrative single market.

The Turkish lira tumbled as much as 2.5 percent on Wednesday, as the country confronts Islamic State and Kurdish militant bombings, an economic slowdown, and political uncertainty over plans to extend President Tayyip Erdogan’s powers.

It has lost 5.7 percent so far this week.

Oil edged up on reports of Saudi supply cuts, but prices were prevented from rising further over a lack of detail of these reductions and because of signs of rising supplies from other producers.

Global benchmark Brent crude futures traded at $53.70 a barrel, having fallen to $53.58 on Tuesday, touching their lowest level since Dec. 15.