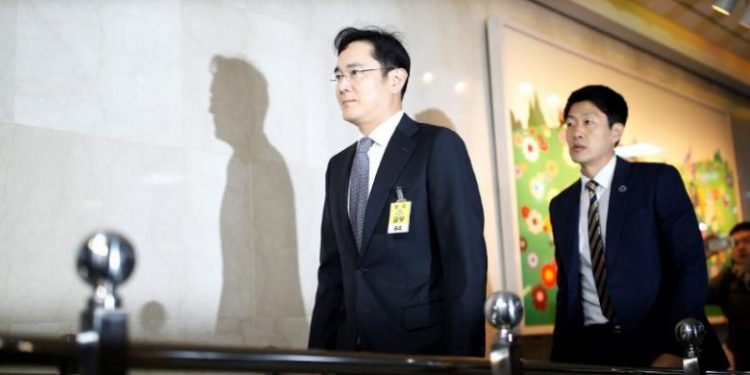 Prosecutors have been looking into whether Samsung payments of about 30 billion won ($25 million) for a business and foundations backed by Park’s friend, Choi Soon-sil, were connected to a 2015 decision by the national pension service to back a controversial merger of two group affiliates.

Samsung has acknowledged making contributions to two foundations as well as a consulting firm controlled by Choi. The prosecution this week summoned two senior Samsung Group officials for questioning, though they were listed as witnesses.

Lee Kyu-chul, a spokesman for the special prosecution team, told a briefing the Samsung leader had been summoned for questioning at 9:30 a.m. (0030 GMT) on Thursday, over suspicions including bribery, but did not elaborate.

“All possibilities are open,” the spokesman replied, when asked if the prosecution team would request an arrest warrant for Lee. A Samsung Group spokeswoman declined to comment.

Park could become South Korea’s first democratically elected leader to leave office early after parliament voted in December to impeach her over the corruption scandal, which has engulfed the country’s power elite. The impeachment must be upheld or overturned by the Constitutional Court.

National Pension Service chief Moon Hyung-pyo was arrested in December after acknowledging he pressured the fund to approve the merger between Samsung C&T Corp and Cheil Industries Inc in 2015 while he was health minister.

Park has described it as a policy decision made by the world’s third-largest pension fund in the national interest.

Lee, 48, denied bribery accusations during a parliamentary hearing in December, rejecting assertions from lawmakers that Samsung lobbied to get the fund to vote in favor of the merger.

The special prosecutors’ office said it was looking into whether Lee gave false testimony during the parliamentary hearing.

“Samsung is the one that has made the biggest contributions among conglomerates and it had an exclusive relationship with Choi Soon-sil, buying a horse,” Shin said, referring to the firm’s sponsorship of Choi’s daughter’s equestrian career.

The daughter, Chung Yoo-ra, was arrested in Denmark this month after being sought by South Korean authorities.

Shares in Samsung units did not move sharply following the news, as some investors had anticipated the possibility of Jay Y. Lee being formally indicted. Shares of Samsung Electronics ended up 2.8 percent, edging lower after trading at a record 1.928 million won.

The shares could see a correction because of heightened uncertainties, but the stock will see support from strong earnings prospects, said HDC Asset Management fund manager Park Jung-hoon.

Shares of firms such as Samsung C&T Corp (028260.KS) that are more closely linked with potential succession-related restructuring may weaken further, Park said, as formal prosecution of Lee could delay the process.

“I think some investors are still uncertain on whether the special prosecutors will go as far as arresting and detaining Jay Y. Lee, given the uncertainties such an action might trigger on Samsung companies,” he said.

In 2008, Lee Kun-hee stepped down from the role of Samsung Group chairman after group executives were indicted on suspicion of brokering a sweetheart deal for his children to have a greater ownership stake in Samsung’s de facto holding company.

He was handed a suspended 3-year sentence for tax evasion, but was eventually pardoned.