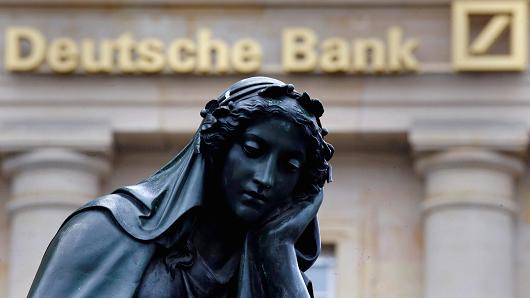 According to the FCA, Deutsche Bank failed “to properly oversee the formation of new customer relationships and the booking of global business in the U.K.” and ordered it to pay the £163 million charge ($203.83 million) – the largest penalty ever applied by the British regulator.

Due to the inadequate controls, Deutsche Bank customers and DB Moscow – its Russian arm – transferred more than $6 billion from Russia to overseas accounts through Deutsche Bank in the U.K. in a process called “mirror trades”.

“The size of the fine reflects the seriousness of Deutsche Bank’s failings. We have repeatedly told firms how to comply with our AML (anti-money laundering) requirements and the failings of Deutsche Bank are simply unacceptable,” Mark Steward, director of enforcement and market oversight at the FCA, said in the statement.

“Other firms should take notice of today’s fine and look again at their own AML procedures to ensure they do not face similar action,” Steward added.

The fine comes after the bank announced Monday it would pay $425 million to a banking regulator in New York over a similar “mirror trading” scheme that transferred $10 billion out of Russia.

Deutsche Bank said in a statement Tuesday that it reached settlements with the U.K.’s FCA and the New York State Department of Financial Services on investigations into the bank’s anti-money laundering controls in its investment banking division.

“The FCA noted in its findings that the bank has committed significant resources to improving its AML controls and recognizes the work already undertaken in this area. The FCA also noted that the bank has been exceptionally cooperative in bringing the matter to its attention and throughout its investigation,” the bank said.

In a memo sent to employees, Karl von Rohr, chief administrative officer at Deutsche Bank, reinforced that the bank has taken a number of steps to improve such controls.

“We have taken a number of important actions including a comprehensive review of our client onboarding and KYC (know your customer) procedures, launched in 2015. We continue to upgrade the bank’s AML monitoring and training and have increased headcount in anti-financial crime by almost 30 percent in 2016 with plans to increase by a further 50 percent in 2017.”

“In addition, as part of our efforts to simplify the bank, we closed our onshore investment banking business in Russia in 2016. We also increased those countries defined as having higher AML risk weightings from approximately 30 to approximately 100. This requires the bank to perform enhanced due diligence when onboarding entities from those countries,” he added.

We are not exiting Ghana - Airtel