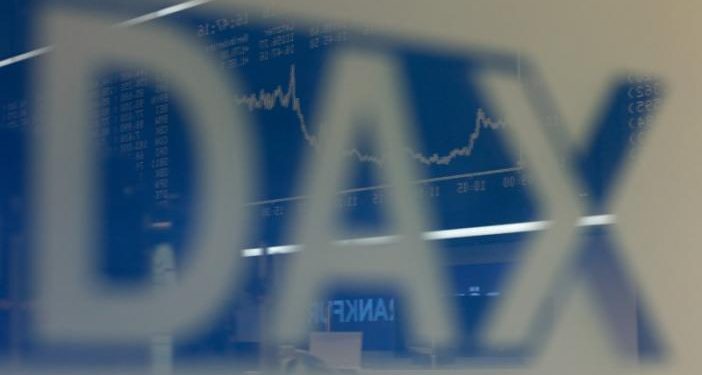 The German share price index DAX board is reflected in a glass at the stock exchange in Frankfurt, Germany, December 8, 2016. REUTERS/Ralph Orlowski

European and U.S. stocks looked to end a sluggish week on a high note on Friday, while the dollar was on track for its biggest weekly fall in two months and U.S. bond yields eyed their longest run of weekly declines since July.

Investors largely shrugged off figures that showed Chinese exports fell the most last year since 2009, and will look to earnings reports from U.S. banks JP Morgan Chase (JPM.N), Bank of America Merrill Lynch (BAC.N) and Wells Fargo (WFC.N) later in the day for direction.

“The banking sector will be the major focus,” said Naeem Aslam, chief market analyst at Think Markets UK. “With rising interest rates and hopes of more friendly regulation, the shares of these banks have a lot of upside in the coming days.”

Bank stocks led the charge in European trading, rising 1 percent .SX7P to lift the FTSEuroFirst 300 .FTEU3 0.5 percent. The broader index was still down slightly on the week though, its first weekly fall in six.

U.S. futures pointed to a slightly higher open on Wall Street ESc1. Thursday’s slip into the red marked yet another failed attempt to lift the Dow Jones through the magical 20,000 points barrier .DJI.

Chinese trade data on Friday poured oil onto those flames. December exports fell by 6.1 percent from a year earlier, meaning the overall fall in exports last year was the biggest since the depths of the crisis in 2009.

As the world’s largest trading nation, China could come under pressure from protectionist measures this year if Trump follows through on his campaign pledges to brand it a currency manipulator and impose heavy tariffs on the country’s imports.

MSCI’s broadest index of Asia-Pacific shares outside Japan .MIAPJ0000PUS slipped 0.1 percent, after rising to its highest levels since late October in the previous session. It was up 1.8 percent for the week.

Japan’s Nikkei stock index .N225 finished up 0.8 percent, though it still ended the week down 0.9 percent.

The symbiotic dance between the dollar and U.S. Treasury bond yields held firm on Friday. Both headed lower to end a week in which has seen the dollar fall almost 1 percent and yields extend their longest downturn since last summer.

The 10-year yield US10YT=RR was flat at 2.36 percent, recovering from a six-week low hit on Thursday. But it’s down more than 5 basis points on the week and around 30 bps since the Federal Reserve raised interest rates in mid-December.

The dollar wallowed around five-week lows against a currency basket .DXY at 101.29, and down 0.9 percent for the week.

The dollar index had scaled 14-year peaks this month, on speculation that Trump’s policies would spur growth and inflation, and prompt the Fed to raise interest rates at a faster pace than previously expected.

But doubts have crept in.

“Bond markets continue to retrace from the yield highs set in the middle of last month,” RBC Capital markets rates strategists wrote in a note to clients on Friday.

“The latest move (is) seen as a typical ‘buy-the-rumor-sell-the-fact’ reaction as Donald Trump’s pre-inauguration press conference proved to be a disappointment in terms of forthcoming growth boosting policies,” they said.

The overnight rise in crude oil prices, bolstered by the weaker dollar as well as news that Saudi Arabia has cut oil output to its lowest in almost two years and plans further reductions, fizzled out in early European trading.