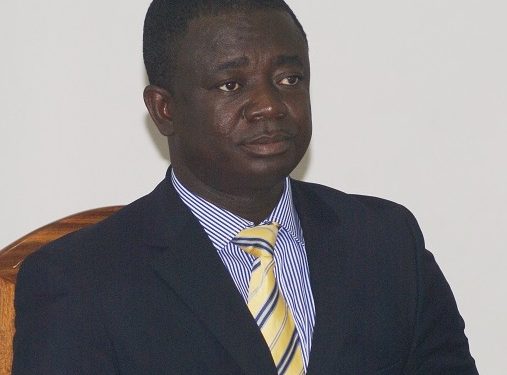 The Chief Executive Officer of Ghana Cocoa Board (COCOBOD) Dr. Stephen K. Opuni has been sacked.

A letter signed by the Secretary to the President, Nana Bediatuo Asante directed Dr. Opuni to handover  to the president’s representative at the Ministry of Agriculture—Dr. Owusu Afriyie Akoto.

“You are directed to handover your office to His Excellency, the president’s representative at the Ministry of Agriculture Dr. Owusu Afriyie Akoto, and proceed to collect any terminal benefits or facilities due you under relevant law,” the letter indicated.

Dr. Opuni was also directed to vacate the office by 5:00pm today.

“In view of the urgency attached to the matter, please ensure that you hand over and cease to act as Chief Executive of Ghana COCOBOD not later than January 13, 2017”, it explained.

Dr. Opuni was appointed CEO of  COCOBOD on November 30,2013 after serving as the  CEO of the Ghana Food and Drugs Authority from April 2009 to the end of November, 2013.

He studied Medicine in the Vitebsk State Medical Institute in the former USSR and graduated as Doctor of Medicine in June, 1991.

He returned to Ghana in July, 2003 and worked at the Komfe Anokye Teaching Hospital in the Department of Surgery as a consultant. He was appointed as Head of Accident and Emergency Directorate of the hospital in 2007. He is a Fellow of the Ghana College of Surgeons.