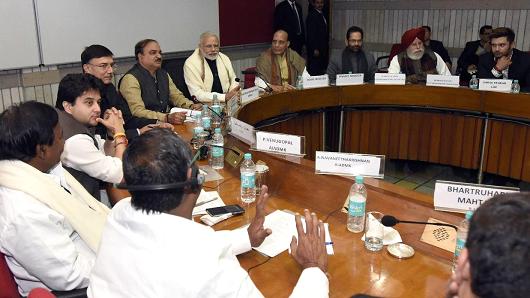 As India’s economy continues to reel in the aftermath of last year’s demonetization drive, Finance Minister Arun Jaitley must balance between the need for stimulating growth and continuing fiscal discipline when he presents the 2017-2018 budget on Wednesday.

This year’s budget also boasts structural changes. Starting from this fiscal year, the railway budget will now be merged with the government’s annual financial blueprint, ending a decades-old practice of presenting them separately. Meanwhile, the budget date has also been brought forward by one month to help ministries better allocate their spending.

“Against the economic backdrop and upcoming state elections, the key debate is whether the government will tilt towards activating fiscal easing to revive domestic demand and take a more populist stance in the budget and initiate transfers to households,” explained Morgan Stanley economists in a recent report.

But with government debt running well above fellow Asian emerging markets, New Delhi has limited fiscal space for populist measures. For 2016, India’s public debt is seen at 66 percent of GDP, versus China’s 38 percent, Malaysia’s 55 percent and Thailand’s 43 percent, according to the International Monetary Fund.

“Despite the negative impact on short-term growth from demonetization, fiscal discipline will remain a priority,” said Radhika Rao, economist at DBS. “Signs of a populist budget will be positive for markets but if accompanied by a larger-than-expected borrowing program, sentiments will quickly reverse.”

While Jaitley is unlikely to announce any handouts, he may slightly deviate from previous goals. The government earlier set a fiscal deficit target of 3 percent of GDP for FY17-18, compared to 3.5 percent in the previous year, but economists now widely expect that number to widen to 3.3 percent.

“This could provide flexibility for more public investments to offset the drag on growth from the recent demonetization move,” noted Rao.

Even as the economic pain of the cash shortage became clear by end-November, Modi’s televised year-end address on Dec. 31 didn’t indicate any bias towards fiscal easing—a potential sign of a constrained budget.

“Fiscal policy, and hence the budget, will play more of an incremental role in supporting the economy rather than being a game changer per se,” Morgan Stanley summed up.

Rural areas and infrastructure could be the primary beneficiaries of government funds, according to a Goldman Sachs report.

To combat the recent slowdown in the rural economy, one of the worst hit sectors from demonetization, the investment bank expect more investment in irrigation, low cost housing, and electrification. That would build on promises Modi made in his year-end speech, which included loans for low-cost housing and interest rebates for farmers.

On the capital front, Goldman expects expenditure to increase by 26 percent, with a focus on creating assets in railways, roads and defense rather than subsidies.

Not much action is expected on personal income taxes, but India Inc could receive good news.

“Some tinkering in personal income tax rates are expected, but limited fiscal room implies meaningful changes are unlikely,” said Morgan Stanley. The bank, like many others, instead expects a further reduction of corporate tax rates.

In the 2016-2017 budget, Jaitley had already announced a lowering of the average corporate income tax rate to 25 percent from 30 percent over four years.

“The demonetization initiative is also likely to raise one-off revenues, which along with other measures, such as tweaks to the capital gains tax regime, or a revival of the cash transaction tax, might be channeled to fund fresh spending plans,” added DBS’ Rao.

But rollout of the long-awaited Goods and Services Tax (GST),a single levy to replace indirect taxes and levies, could complicate the overall picture. Earlier this month, Jaitley said July 1 was a more realistic deadline for GST implementation, instead of the previous April 1 date.

“We expect the government to reiterate the long-term benefits of the move on revenue generation, growth, formalization of the unorganized sector and success in arresting corruption/tax evasion,” said Rao.

The public is also expecting an updated timeline regarding the return to normal levels of cash in circulation.

Policies on bank reform may also be on the table. Specifically, higher allocations for public sector bank capitalization, creation of a stressed asset buyout fund, or ‘bad bank,’ as well as further measures to promote digital banking would all be welcomed, Goldman stated.