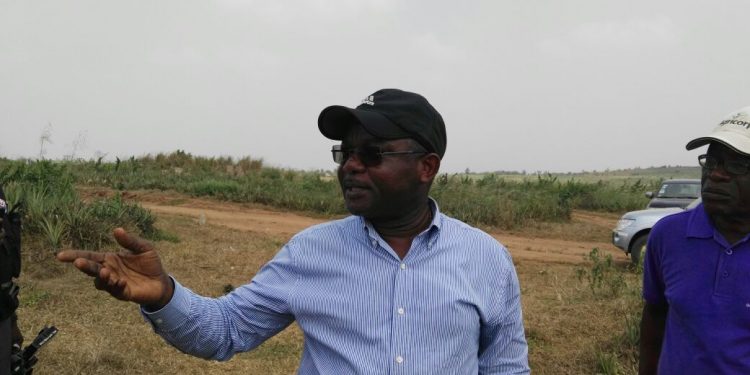 The Management of Golden Exotics Company—the leading producer and exporter of pineapple to the European Union(EU) from the West African region, has accused KAS Estates Limited of destroying the company’s farms in Obom, near Amasaman in the Greater Accra region.

According to company, it farmlands are being destroyed by real estate company, KAS Estates Limited.

Taking journalists on a tour of its farms in Obom, the Pineapple Production Manager of Golden Exotic Limited, Mr. Samuel Sarpong, alleged that KAS Estates has encroached on its land, destroying some of its pineapple farms.

“The main challenge we face here is the wanton destruction of our land, our production land. There are two phases of it, we have the sand weaners and the estate developers. What the sand weaners do is to destroy the land. You know on a pineapple production we leave some of our lands to fallow, once you finish your production you’ve got to leave the lands to retrieve it nutrients. So we leave these lands to fallow but they will wake up in the middle of the night, or weekends when there is nobody and go and clear the top soil and then wean the sand,” he said.

Pointing to some areas that were destroyed on the eve of the New Year, 2017, Mr. Sarpong stated that managers of the farm woke up to a surprise on January 1, with its new farm destroyed by activities of sand weaning.

He lamented that such activities leave the company worse off since nothing can be done to salvage the situation once the top soil is destroyed.

“In our production for farming, once you destroy the top story, you’ve rendered the land useless. This is what we have been going through. This  time, it has gotten worst,” he said.

More worrying, Mr. Sarpong disclosed that the company had to reduce its workforce from over 1,000 since 2006 to a current figure of 250 workers due to loss of lands.

“Persistent attacks on our lands have really shrunk the total capacity of lands that we have, for that matter we also have to reduce our staff. That aside, they come and peg some portions of the land selling it out illegally. These guys at times come with police protection. From 2006 we had over 1,000 workers but now we have just about 200 workers. From 1,000 hectares to 300 hectares so we have to reduce accordingly to meet the land available,” he said.

“For quite some time now we have been having a persistent attack from a real estate company called KAS Estates Limited. Any time we finish the harvesting as you can see and we leave the land fallowed because we fallow the land for a minimum of two years, we come back and we see pillars all over the field. We remove the pillars and then they still come. For this particular company, all our fallow lands they have encroached upon them to the extent that our workers can’t even come to field to work because they threatened with the police,” he alleged.

Land was leased to Golden Exotics

Madam Doodowa Doodo, a lady who claimed to be a family member to the original owners of the land denied that no land has been leased to KAS Estates to construct houses.

“He is not part of our family. We don’t know, yet he has encroached on our land. The only company we know is Golden Exotics. That is the company my siblings leased the land to. My siblings are all dead. I am a witness we heard somebody has come to excavate the land. We don’t know KAS Estate Limited,” she said.

“Golden Exotics approached the land owners and they were given the land and even I was involved in all the acquisition of the land since they started work over here,” he said.

All efforts by Citi Business News to reach the CEO of KAS Estates Limited, Yahya Kashmir  for a response proved futile.

Management of  KAS Estates Limited has refuted the allegations that the company has encroached on farmlands of Golden Exotics Company.

Reacting to the story, lawyer for KAS Estates Charles Bentum, described the allegations as false, since management of Golden Exotics have no title the land.

“The allegations from Golden Exotics are baseless and they are false and they are calculated to court hatred, ridicule and contempt for KAS Estates as a business entity, indeed we like to state that KAS Estates is a reputable company that is contributing its quota to the development of this country in the housing sector, and is building so many affordable houses for members of the public to be able to have a place to lay their head”.

Debunking the allegations, Mr. Bentum explained that Obom land is held by pockets of families and not a stool land.