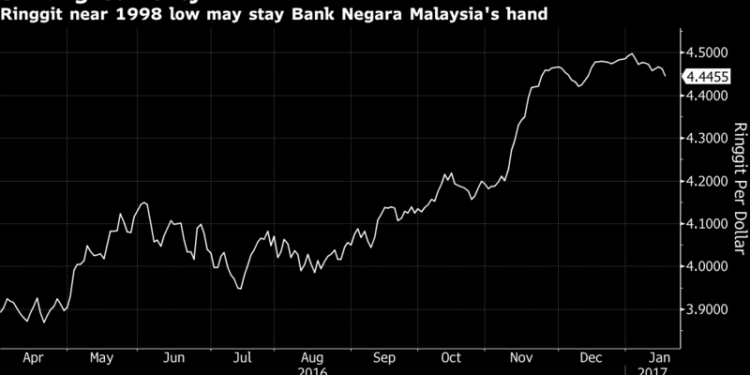 Bank Negara Malaysia held its key rate at 3 percent, it said in a statement in Kuala Lumpur Thursday, as predicted by all 17 economists in a Bloomberg survey.

The ringgit has depreciated about 6 percent against the dollar since Donald Trump’s surprise win in the U.S. election — the worst hit among Asian emerging markets — prompting Bank Negara to take steps to restrict some offshore foreign-exchange trading to curb the currency’s slide.

The measures have helped provide stability in the ringgit, though “uncertainties in the global economy, the policy environment and geopolitical developments may, however, result in bouts of volatility in the regional financial and foreign exchange markets,” the bank said. “While the risks of destabilizing financial imbalances are contained, the monetary policy committee will monitor these risks to ensure the sustainability of the overall growth prospects,” the bank said.

With more Fed rate increases to come this year, the door for further policy easing in Asia may have closed.

“Given the pressure on our emerging-market currencies, potentially higher U.S. yields pressure on the interest-rate differential between the U.S. and Malaysia, all this would give Bank Negara less room to ease interest rates at this point,” Julia Goh, an economist with United Overseas Bank Ltd. in Kuala Lumpur, said before the decision. “I don’t see quite a lot of pressure on Bank Negara to cut at this point.”
The economy is projected by the government to grow 4 percent to 5 percent in 2017, while inflation is forecast to average between 2 percent and 3 percent this year. Consumer prices rose 1.8 percent in December from a year ago.

The central bank said inflation will probably average higher in 2017 than the 2.1 percent reached last year. The economy remains on track to expand as projected, it said.