McDonald’s sells most of China, HK business to CITIC, Carlyle for $2.1 billion 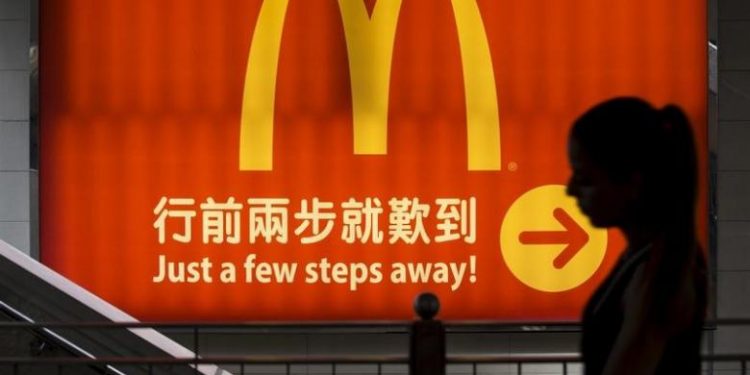 A woman walks past a McDonald's outlet in Hong Kong in this July 25, 2014 file photo. REUTERS/Tyrone Siu/Files Photo

McDonald’s Corp (MCD.N) has agreed to sell the bulk of its China and Hong Kong business to state-backed conglomerate CITIC Ltd (0267.HK) and Carlyle Group LP (CG.O) for up to $2.1 billion, seeking to expand rapidly without using much of its own capital.

The U.S. fast food chain said local partners will help speed up growth in the world’s No. 2 economy through new restaurant openings, particularly in smaller cities that are expected to benefit from increased urbanization and income growth.

The company has more than 2,400 restaurants in mainland China and roughly 240 in Hong Kong. The new partnership plans to add 1,500 in the two areas over the next five years.

Under the deal, Hong Kong-listed CITIC Ltd will own about 32 percent of the business, with CITIC Capital, an affiliate company that manages private equity funds and other alternative assets, holding another 20 percent.

Carlyle will control 28 percent of the business, while McDonald’s will retain a 20 percent stake, the companies said in a statement. The deal will be settled in cash and in shares in the new company that will act as the master franchisee for the 20-year period.

McDonald’s originally wanted to raise up to $3 billion from the sale of the business, but later decided to keep a minority stake to benefit from exposure to future growth in China, a person with direct knowledge of the plans previously told Reuters.

The partnership will also aim to boost sales at existing restaurants, with menu innovation a key focus. Fast-food firms including McDonald’s and Yum Brands Inc (YUM.N) are recovering from a series of food-supply scandals in China that have undermined their performance.

“I’m not sure how much more you can do with McDonald’s in China. They’re a well-run company, so I’m not sure that CITIC and Carlyle are able to add that much more aside from capital,” Rein said.

McDonald’s said in March it was reorganizing operations in the region, looking for strategic partners in China, Hong Kong and South Korea. The company later decided to keep its South Korea business.