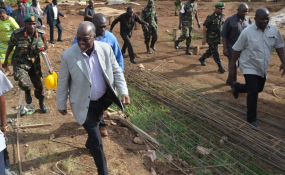 The International Monetary Fund (IMF) says some government policies and the uncertainty of its actions could dent Tanzania’s record of a stable economic growth achieved in recent years.

According to the IMF, President John Magufuli’s approach to the management of the economy faces four key challenges with a risk of undermining the country’s macroeconomic stability.

It listed them as a tight stance on macroeconomic policies, the slow pace of credit growth that may become protracted, slow implementation of public investment, and private sector uncertainty about the government’s new economic strategies.

However, the Bretton Woods institution noted that the economy is still projected to record a robust growth this year.

“Tanzania’s macroeconomic performance remains strong. Economic growth was robust during the first half of 2016 and is projected to remain at about 7 per cent this fiscal year. Inflation came down below the authorities’ target of 5 per cent and is expected to remain close to the target, while the external current account deficit was revised down on account of lower imports of capital goods,” said a mission statement released on Monday.

IMF has also welcomed President Magufuli’s anti-corruption drive and tax revenue collection measures. “The strong drive against corruption and tax evasion has led to higher fiscal revenues, which, if sustained, will provide a good foundation for the envisaged scaling up of infrastructure investment, starting with the 2016/17 budget.”

The IMF said the government should speed up agreed reforms and loosen on the measures that are putting pressure on liquidity and also engage more with the private sector for a quick win. “… a significant structural transformation of the economy by nurturing human development, full involvement of all stakeholders in policy design and implementation–including importantly the private sector–will be crucial,” IMF said.

According to IMF, the current tight macroeconomic conditions should be addressed by loosening the short-term policy stance, in line with program targets.

It says the government should step up budget implementation, particularly in public investment, including by mobilizing external financing. It wants BoT to intervene to ease the tight liquidity situation and support credit to the private sector.

The IMF statement follows its board meeting Monday and assess the Tanzania government’s performance in implementation of the fifth review of the country’s economic performance under the programme supported by a three-year Policy Support Instrument .

Since he assumed office in November 2015, President Magufuli has taken measures that have squeezed public spending that have also had a knockoff effect on private sector.

The actions included a mop-up of nearly Sh500 billion from commercial banks, a sustained and single minded tax crackdown while public agencies have been restricted to doing business within government. There has also been a general decline in public spending as travel, workshops and meetings in hotels have been curtailed.

The state’s relations with the private sector has so far been unpredictable, with directives and actions by some government officials sending mixed signals on their engagement.

The government has largely remained noncommittal on appeals by banks to help ease the liquidity crisis in the financial sector, which has seen a significant drop in lending to productive sectors of the economy such as manufacturing, agriculture, transport while some banks have frozen individual loans. The IMF feels that a stable macroeconomic climate will stimulate investment and enable the government to meet some of its development obligations.

The Finance minister, Dr Phillip Mpango, recently revealed that the government was behind its budgetary targets amid concerns that the taxman was falling behind targets while donors support is virtually stagnated.

The government has also not been able to borrow externally over what the minister said were high interest rates. It now targets to borrow at least Sh2.2 trillion domestically to fund projects to plug a gap of about 20 per cent of its target. BoT show that development expenditure for October pegged at Sh713.7 billion could only attain Sh380.2 billion.

Yesterday, a professor of agricultural economics based at Sukoine University, Prof Damian Gabagambi, told The Citizen that the IMF warning was apt as the consequences could be fatal to the economy.

“In fact right now, you could say we are in the stage of a recession and if we don’t take heed of the IMF advice and act, the country may enter the stage of depression, which is worse,” said Prof Gabagambi. He said the move to borrow heavily locally was not a viable solution because already the banks and private sector are starved.

“The short term solution is for the government to look for other international financial markets in the eastern world such as China, Japan and South Korea. But the long term solution is embarking on measures that can stimulate investments and production, because investors are now scared due to the uncertainty of our policies,” he said.

Kigoma Urban MP Zitto Kabwe agrees that the resort to borrowing from commercial banks will lead to weakening of the private sector and further slackening of the economy.

“The government should pay domestic debts and be wary that its loan plan will lead to a crowd-out effects on private sector’s ability to borrow funds to invest,” Mr Zitto said.

The MP also asked the government to renew its relations with donors and international financiers, because there is already a negative image of Tanzania globally, arising from negative perception of the private sector.

Algeria: Focus On Sub-Contracting in 2017