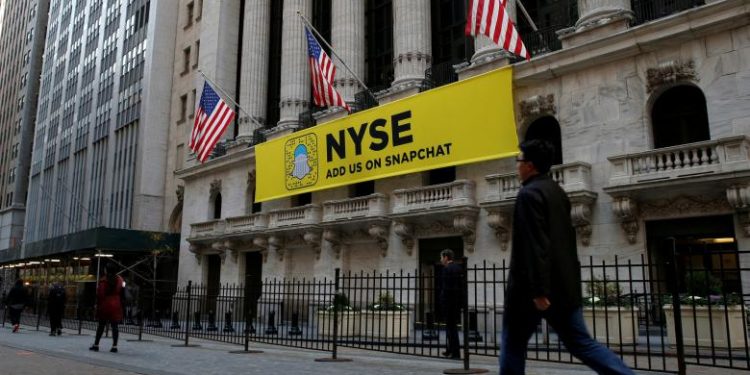 The New York Stock Exchange – its arch-rival – on the same day tweeted a video shot from the floor of its exchange, showing that it too was using the social media giant’s gadget.

The scramble to promote Snapchat’s “spectacles” is revealing the fierce competition between the two exchanges to host initial public offerings (IPOs) of prominent technology startups.

Experts say the contest is less about the fees exchanges generate from such listings than it is about bragging rights.

Snap Inc, Snapchat’s parent company, is eyeing a spring debut that may peg its value as high as $25 billion, sources have told Reuters. It would be the biggest U.S. tech IPO since Facebook Inc (FB.O) in 2012.

The listing would likely only generate a few hundred thousand dollars in annual fees, but Snap’s IPO carries prestige that could help an exchange win future business.

The popular messaging service is just one of many private technology companies expected to go public in the next year or two, including peer-to-peer lodging company AirBnB Inc and streaming music service Spotify Ltd.

“Competition among the exchanges is fierce and winning large, marquee companies can have a halo effect that results in future listings business,” said Alex Wellins, co-founder of IPO advisory and investor relations firm Blueshirt Group.

Snapchat is discussing a potential listing with both Nasdaq and NYSE, which is owned by Intercontinental Exchange Inc (ICE.N), and has not made a decision yet, people familiar with the situation told Reuters. Snapchat, Nasdaq and NYSE declined to comment.

Exchanges, much like investment banks, often begin courting high-profile companies long before they are ready to list.

Nasdaq and NYSE compete over their technology, fees, reputation and support services for investor and public relations. Their marketing includes buying advertising in publications and outdoor signage for the companies, IPO advisers said.

Up until now, the efforts to land even the most high profile IPOs – such as Facebook and Twitter – happened largely behind the scenes, with theatrics saved for listing day celebrations.

For instance, NYSE once let a monkey ride a horse around its trading floor to mimic E*Trade Financial’s (ETFC.O) television commercial when the online broker switched exchanges in 2001. The listing for E-trade has since returned to Nasdaq.

With a public platform such as Snapchat though, the exchanges want to show they understand and support the technology while they are still competing for the listing. Having their products used by the exchanges can also be an important signal of their loyalty, said Pat Healy, chief executive of Issuer Advisory Group, who has advised companies such as Facebook, Zillow and Groupon on where to list. “I’ll do business with you if you give me the listing. I’ll buy advertising in your newspaper. I’ll fly your airline. I’ll use your computer system,” Healy said, describing the types of promises exchanges make.

To be sure, a strong social media presence is important for both the exchanges, and both use many social media platforms to promote themselves and the companies that list with them.

ROLLING OUT THE BANNER

For Nasdaq, a Snapchat win would help redeem itself from famously bumbling Facebook’s IPO with massive technology errors.

Long known as the home for tech IPOs, the Facebook fiasco put Nasdaq on the defensive. The exchange commanded 85 percent of technology IPO proceeds in 2012, but by 2014 that plunged to 11 percent, according to Thomson Reuters data.

Nasdaq has since recouped a sizeable chunk of those losses but it has been a slow period for tech IPOs. The last high-profile U.S. Internet company to go public, Twitter Inc (TWTR.N), joined NYSE in 2013.

Still, with fewer companies going public, the stakes are getting higher to lure listings.

Josh Machiz, a Nasdaq executive focused on its social media efforts, said the exchange chose to rent the helicopter because it wanted to come up with something “exciting and thoughtful” for the launch of Snapchat’s first hardware product. He declined to comment on any effort to win the Snap IPO.

As for NYSE, it draped a large, bright yellow banner outside its Lower Manhattan building to invite Snapchat followers in October, the same month media reported Snapchat had hired underwriters. Such banners are usually reserved to celebrate the first listing day of companies.