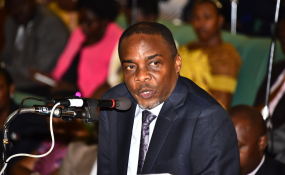 Parliament on Wednesday agreed to set up a select committee to look into what has been referred to as the “Golden Presidential handshake” that cost tax payers sh6 billion. The bonus was paid out to a team of 42 selected government officials in “recognition of their efforts” to recover capital gains tax in an international case last year.

“Honourable members don’t be uncharitable. Accept the team did a good job but let’s question the process,” Speaker Rebecca Kadaga told parliament, adding ” tomorrow I’ll read the terms of reference and allocate investigations of the “Presidential Handshake” to the relevant committee.”

The committee is also expected to find more about the amounts paid so far in taxes by Heritage and Tullow oil companies in respect of the arbitration proceedings, and the fund on which these monies are kept.

This followed the adoption of a motion by Mbarara municipality MP Michael Tusiime calling for a resolution of parliament to probe what he termed a “scandal that has soiled a number of public officers who were until then known as incorruptible”.

Some of the officials reported to have received part of the Sh6 billion include Allen Kagina, the former URA Commissioner General, her successor Doris Akol, KCCA executive director Jennifer Musisi, former Attorney General Peter Nyombi and his then deputy Fred Ruhindi and Secretary to the Treasury Keith Muhakanizi.

Presenting his motion, Tusiime, a former Uganda Revenue Authority (URA) staff said that there was no legal basis for the payment of such a reward under the laws applicable to the public officers.

Tusiime futher stated that the payment of the reward amounts to abuse of public funds since the officer were carrying on their normal duties in the course of their employment.

“The payment of such a reward was irregular since the same was not appropriated by parliament as required under the public finance management act, 2015”. Said Tusiime.

Niwagaba said “the oil cash bonanza” presents an opportunity for government to show its willingness to fight corruption stressing that implicated officials must appear in the anti corruption court as well as returning the money to the petroleum fund.

He was backed by John Baptist Nambeshe, Manjiya MP, who suggested that if the money was used to procure land or property, they should be auctioned so that the money is returned to the consolidated fund.

William Byaruhanga, the attorney general had a torrid time defending “the presidential handshake” noting that the reward was okayed by the president in a letter dated 16th November 2015 to the URA commissioner.

Byaruhanga told a charged house that the reward was meant to appreciate the professionals and patriotism exhibited by the team members, but also to encourage other public officers who may be faced with similar assignments and challenges in future

“Some of this included pressure from some of Uganda’s development partners who argued that taxing the transaction would discourage further oil company investment in the petroleum sector in Uganda,” Byaruhanga said.

Byaruhanga further stated that the process of winning this land mark case did not only involve technical work but government had to resist immense pressure against the transaction from all corners of the world.

President Yoweri Museveni, had in a Tuesday meeting at state house, with members of parliament from the ruling National Resistance Movement reportedly promised to defend the beneficiaries urging the MPs to stop maligning them.

“Parliament is not God… .don’t malign the good people. You are not the first Parliament… you know I will defend them because I am the one who gave them the money. You are abusing them… I don’t want to hear that anymore,” Museveni reportedly said.

While adjourning the house, the speaker of parliament Rebecca Kadaga said the other terms of reference and the members of the committee would be named on Thursday when parliament sits again.