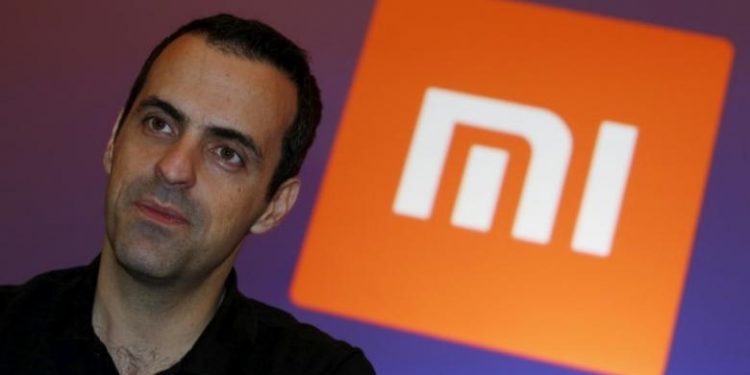 Xiaomi's Vice President Hugo Barra looks on in front of the company's logo during a group interview after the launching ceremony of Redmi Note 3 in Hong Kong, China March 21, 2016. REUTERS/Bobby Yip - RTSBEFO

Hugo Barra, the most prominent global executive at China’s Xiaomi Inc [XTC.UL] and the face of the smartphone maker’s global expansion, has left the company citing health concerns and a new role.

In a social media post on Monday, Barra, Xiaomi’s vice president in charge of global operations, said he was leaving the company after three-and-a-half years for a new project based in Silicon Valley.

Xiaomi was briefly the world’s most valuable startup and had hopes to be China’s equivalent of Apple Inc (AAPL.O). But the firm has recently grappled with slowing smartphone sales and fell out of the top five in China for smartphone vendors in 2016, after reaching No. 2 in 2015.

“The last few years of living in such a singular environment have taken a huge toll on my life and started affecting my health,” Barra said in the statement on Facebook.

“Seeing how much I’ve left behind these past few years, it is clear to me that the time has come to return.”

Barra, who became synonymous with the company’s international expansion efforts, was based in Beijing, though often traveled to other strategically important markets including India and his home country of Brazil.

In a letter released to employees earlier this month, Xiaomi Chief Executive Officer Lei Jun said “the worst is over”, referring to the company’s recent struggles to keep up with an ever increasing number of local competitors.

For Barra, the role has involved many roadblocks, including a halt of production in Brazil due to the country’s economic instability, and a temporary ban in India in 2014 over patent infringements.

Barra said he would officially leave the role after Lunar New Year, which runs until Feb. 2, and take time off before embarking on a new role. He did not specify the role.

A company spokeswoman confirmed to Reuters that Barra has a new role lined up in Silicon Valley, and that Senior Vice President Xiang Wang will lead the company’s global efforts going forward.