TUC, other groups sign MoU with gov’t to participate in management of economy 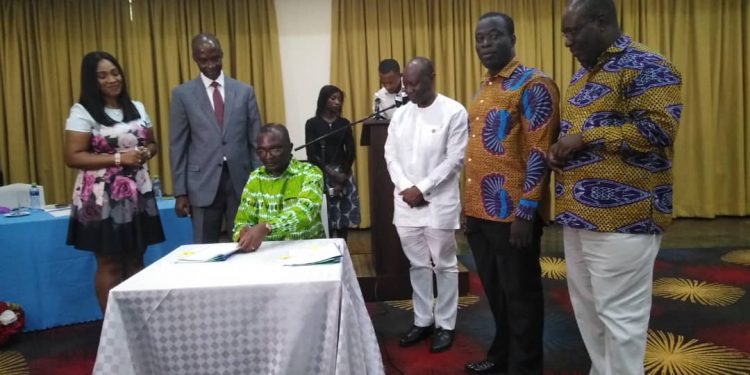 The Trades Union Congress (TUC) and the Employers Association have signed a Memorandum of Understanding with the Finance Ministry and the Ministry of Employment and Labour Relations for effective participation in discussions relating to the management of the economy.

The TUC and the Employers Association now have a slot to make inputs into policies pertaining to government’s expenditure, debt management and other fiscal policies before those policies are implemented.

A 19 member council chaired by the Finance Minister is set to be formed.

Other members of the council will include the Minister of Employment and Labour Relations and representatives of the Trades Union Congress and the Employers Association.

The Memorandum of Understanding was signed after series of discussions between government, the Trades Union Congress and the Employers Association over the need for a social partnership between the four entities that will allow them deliberate and work together for effective management of the economy.

The partnership is to among other objectives provide a platform for frank and open by the stakeholders on macroeconomic issues.

The stakeholders will also analyze key development issues and advice government on those issues.

“It will create some sort of transparency and openness with regards to data and structure, so that we can think through together. Two, three heads always work together. And really, the old enmity of government and labor is not the type of record we want to keep,” Finance Minister Ken Ofori-Atta told Citi Business News after the signing ceremony.

The Trades Union Congress expressed confidence their contributions will be duly considered.