A mining expert has said the government must begin steps to phase out the joint military-police taskforce, Operation Vanguard, in the fight against the activities of illegal miners.

Dr. Isaac Karikari, Coordinator of the Multi-sectoral Mining Integrated Project (MMIP) under the Ministry of Lands and Natural Resources, speaking at a stakeholder forum said while the role of Operation Vanguard cannot be discounted, there is the need for another sustainable means of policing illegal mining prone communities.

“Operation Vanguard’s work is vital. The President’s in his wisdom sent them there and I will agree with him because that was the only way we could stem the tide. But I don’t think the President’s vision is that they will be there forever.

We can also not just remove them otherwise we create a void. We need to have a strategy that would involve changing the mindset of the soldiers themselves letting them know they have a job to do for a period.

Then we can phase them out in an incremental approach then we can introduce community policing eventually so that the citizens themselves in the mining communities should be owning the process of dealing with these things.

President Nana Addo Dankwa Akufo-Addo in 2017 inaugurated a joint task force (JTF) to fight the operations of illegal mining which had led to the destruction of forest reserves, water bodies, farms, and other natural resources.

The JTF is made up of servicemen and women from the Ghana Armed Forces and the Ghana Police Service. At the start of the operation, the government placed a six-month ban on all forms of small-scale mining in the country. The operation was extended from January 2018 to June 2018 because its intended objectives had not yet been achieved. 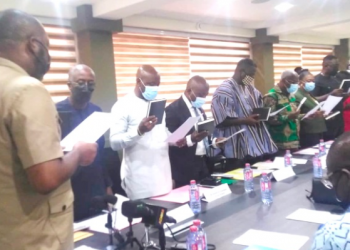 At least 10 percent of electricity produced by the Electricity Company of Ghana and consumed by the public cannot be...