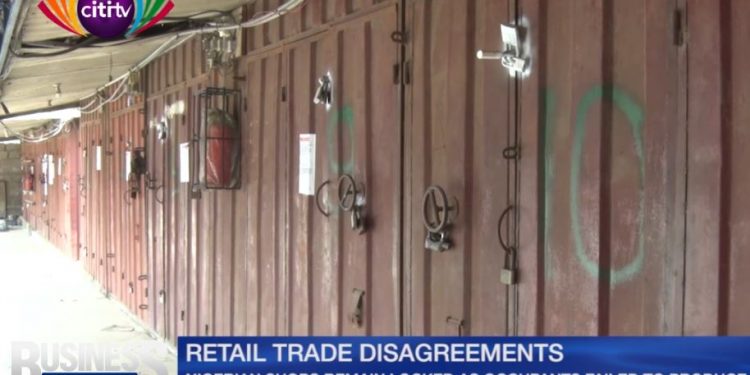 The over 600 foreign-owned shops locked up by some members of the Ghana Union of Traders, GUTA in December 2019 at the Kwame Nkrumah Circle in Accra, have not been reopened.

This is because the occupants have failed to produce their business operating permits after a Presidential Committee on Retail Trade set up by the Ministry of Trade and Industry, decided to vet the foreign nationals, mostly Nigerians to decide on the way forward.

According to the General Secretary of the Nigerian Union of Traders Association Ghana, comrade Evaristus Chukwuduruo Nwankwo, the argument about whether his colleagues have the right documentation or not to do business is neither here nor there.

He indicated that the Nigerian traders did not avail themselves to the Committee because they failed to engage them before embarking on the move.

“We were thinking that as a government at least they should have notified us the leaders that this is what we want to do with your members at Circle so that we can also be part of the process”.

He said GUTA’s argument that foreigners cannot engage in retail according to local laws, is untenable because per ECOWAS protocols, member states are not barred from doing such business in member countries. According to him, Ghanaians are also engaged in similar businesses in Nigeria and have not been harassed.

The First Vice-Chair of GUTA, Nana Kwabena Peprah in reacting to the issue said “the Nigerian traders are trying not to avail themselves for scrutiny. Last time when we went back to the place on 14th January, all the shop owners around that area specifically Soja bar, were there with their workers, but instead of them to come to where we were doing the vetting, they were just standing around and their leaders will call them for meetings behind and later come and stand in front of the shops…But we can’t force them”.

He says if the Nigerian traders are able to provide their business operating documents, GUTA will open the shops for them to do business.

The shops were locked up by GUTA in an effort to get foreigners to exit Ghana’s retail space since government has failed to implement the Ghana Investment Promotion Centre GIPC Act 865 which restrains foreigners from engaging in retail trade.

The law, in section 27 (1) of the GIPC Act, states that any person who is not a citizen or an enterprise that is not wholly-owned by a citizen shall not invest or participate in the sale of goods or provision of services in a market, petty trading or hawking or selling of goods in a stall at any place.