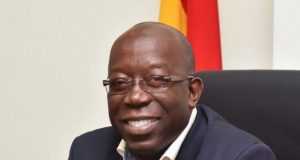 The Management of the Social Security and National Insurance Trust (SSNIT) says it has taken various steps aimed at retrieving its cash locked up in various capital investments.

This comes after the Auditor General revealed in its audit report that the state agency has its US$185 million locked up in two housing projects in Accra.

The Chief Executive Officer of SSNIT, John Ofori-Tenkorang in an interview with Citi Business News explained that some of those investments and loans were granted before he took office, but said his outfit is taking steps to retrieve the money from the loan defaulters.

“We are taking the necessary steps to get the collateral and basically swap assets…and in other places where there is no asset for us to take, [we] engage the defaulters to actually pay. We are working on it… I can assure you that we have taken some steps to get some of these monies back,” he said.

On page 81 of the Auditor General’s report, it said that “In spite of the provision of Section 91(1) of the PFM Act 2016, Management of SSNIT sunk a cedi equivalent of US$185,250,000.00 in a housing Project at Klagon and Sakumono. The Project is halted and it is being managed by RSS, a Joint Venture Company belonging to SSNIT and RegimanuelGray.”

“No due diligence was performed on the investment, the inability to anticipate the increased supply of houses in the housing market, coupled with wrong estimation of the project cost resulted in this state of affairs. Over US$185,250,000.00 of Pensioners’ funds has been locked up in the investment,” the report concluded and further urged SSNIT to set up proper ways of looking into projects of the same nature going forward.

But John Ofori-Tenkorang in the Citi News interview said it has been difficult to sell the housing units due to some changes in the housing market.

“The development has gone on, it is uncompleted, but some building units have been completed but because of the way the market has become soft, they have not been able to sell it…”

In addition to being an equity partner, SSNIT also lent money into it. So what we decided to do was that in order to reduce the indebtedness, we are going to do a swap where they are going to have to give us the completed properties in exchange for amortization of the loan, so we went to the board and the board approved for us to do an asset swap,” he explained.

He said he believes that swapping some completed properties to pay back the loan will help SSNIT get value for money.