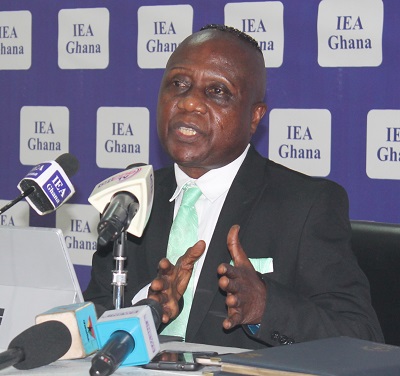 The Institute of Economic Affairs, IEA, has ruled out the possibility of a change in the policy rate to be announced by the Bank of Ghana.

This, the IEA says is as a result of calls from President Akufo-Addo and other stakeholders within the financial sector for a relook at the lending rates being charged by banks in country.

The rate which is of keen interest to businesses does not only signal the rate at which the Central Bank will lend to commercial banks, it also subsequently influences average lending rates on loans to individuals and businesses.

In a statement, the IEA said “the MPC, in fact, is faced with a very challenging decision at this juncture, given these competing demands or interests. In the circumstance, our expectation is that the Committee will go for the safest option, that is STAY PUT!—implying that it will keep the PR [Policy Rate] unchanged at 13.5%.”

“Choosing this option, however, will not make the problem of high lending rates go away. The BoG will only be postponing the solution; the problem will continue to haunt us!”, it noted.

Earlier this month, the IEA drew attention to not only the high level of lending rates, but also to the wide spreads between lending rates and the Policy Rate, Treasure Bill rate, savings rate and inflation.

The IEA argued that these spreads could not be justified in terms of the costs of banks and other factors that usually support high lending rates and interest rates generally. This is because banks have been consistently profitable and, in spite of recent distress encountered by some local banks that triggered extensive reforms by the BoG, financial stability indicators have been generally sound.

The IEA also pointed out at the forum that it is not only lending rates and spreads that are prohibitively high, but so also are other financial charges and fees, including those levied on loans, use of credit cards, use of ATMs and foreign exchange transactions.

“In other jurisdictions, charges for financial services as well as other services and goods that are used on a universal or mass scale—including water, electricity, public transport and postal services—are regulated, since leaving them to the dictates of the market could lead to exploitation of the large numbers of consumers by providers bent on making abnormal profits. The IEA, therefore, called on the BoG to regulate prices of other financial services as well, a call that we want to reiterate here,’ the statement noted.

The IEA also wishes to re-emphasise that capping the spread between the lending rate and the policy rate, and regulating other financial charges, do not amount to introducing a “control policy” in the financial industry, as some people would want to suggest. The BoG will only be exercising its regulatory mandate as most central banks do.

Regulating lending rates and prices of financial services is key as it will ease the burden on consumers of financial services, while also easing the cost of investment as a vehicle for catalysing the growth of the economy. The BoG, indeed, has a national duty to attend to the incessant calls by governments, businesses and CSOs to address what is obviously one of the most important hindrances to the progress of the Ghanaian economy.