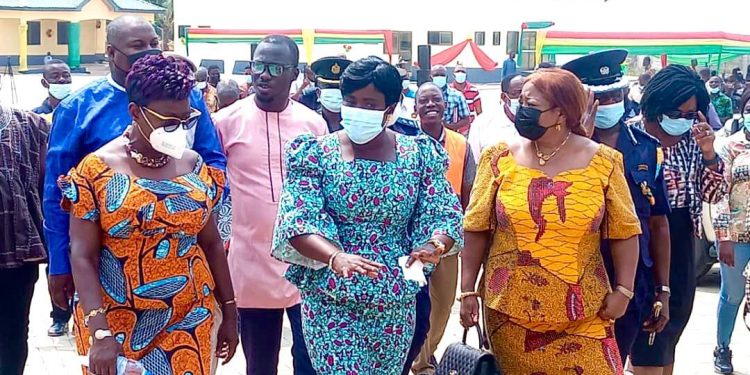 Transit truck congestion at the Elubo border and the haphazard parking of cargo trucks in the Jomoro Municipal Assembly has become a thing of the past with the construction of the Elubo Freight Park.

The project which was initiated and funded by the Ghana Shippers’ Authority (GSA) with support from the Jomoro Municipal Assembly was commissioned on Friday, January 28, 2022.

The ultra-modern facility aims to make the nation’s western transit corridor attractive to businesses and individuals who haul goods between Ghana and La Cote d’Ivoire and beyond in a bid to boost transit trade volumes.

Ghana’s transit trade is estimated to generate GH₵ 134 million annually and the GSA is working hard to meet and even surpass the target in its effort to contribute to the economic growth of the country.

Speaking at the Commissioning of the Elubo Freight Park, the Board Chairperson of the GSA, Madam Stella Wilson said the project is evidence of the premium the Authority places on the transit trade. She saiod more efforts would be made to make Ghana a favorable destination to neighboring landlocked countries.

She further noted that “there are high expectations that more trade volumes would be moved across the borders of the continent with the introduction of the Africa Continental Free Trade Agreement (AfCFTA), hence the timeliness of this all-important Freight and Logistics Park at Elubo.”

She charged the Municipality, to oversee the maintenance of the facility to ensure longevity.

The Municipal Chief Executive of the Jomoro Municipal Assembly, Louisa Iris Arde in her remarks said the park would not only help with beautification of the Assembly but also enhance road safety and most importantly enhance economic activities.

The day to day running of the facility will require a multi-sectorial approach and all stakeholders relevant for the effective operationalization of this facility are urged to give off their best for the achievement of the goals and targets set for the project.”

The Elubo Freight Park sits on a 2acre land with a truck capacity of fourth (40). It is designed such that trucks have ample space for entering, turning, parking and exiting. There is also a twelve (12) dormitory facility available for the drivers and their mates to rest for a while before continuing their journey. It has twenty (20) bathroom stalls and twenty (20) toilet cubicles. It has a Mosque available as well as six (6) offices to run operations.

The transit truck drivers who witnessed the ceremony were grateful and thanked the GSA and the Municipal Assembly for the initiative.