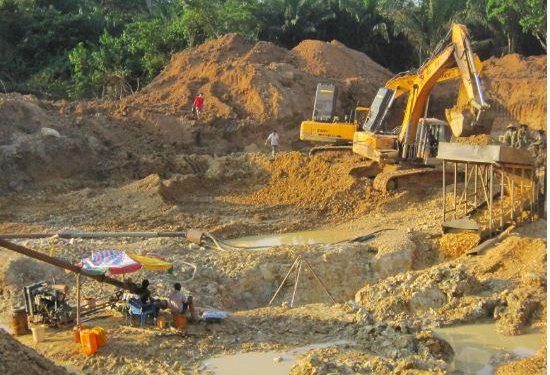 “Those that fail to learn from history, are doomed to repeat it.” Winston Churchill

Examining the past helps shapes future. Learning from past successes and failures is key if we are to grow.
The fight against irresponsible mining can be traced as far as the late 1980s immediately after the passage of the Small-Scale Mining Law, PNDCL 218, in 1989. Another security clampdown occurred in November 2006 user the name “Operation Flush Out”, Fast forward to August 2017, Operation Vanguard was launched to stop all forms of irresponsible small scale mining activities.

In April/May 2021 Operation Halt was launched to help curb the pollution of water bodies by irresponsible mining operations. In August 2021, a Rapid Response Taskforce was formed to augment the efforts of operation halt. In a news report by myjoyonline.com on 15th December 2021, it was announced that operation halt will be relaunched to deal with miners whose operations adversely impacts waterbodies and forest reserves. Despite these efforts and the investment made, there are underlying factors that should be dealt with if we are to be successful in the fight against illegal mining.

Based on the above premise, I sought to identify the political economy factors influencing the fight against corruption in Ghana’s extractive sector. The following factors were identified as obstructing factors in the Artisanal and Small Scale Mining ( ASM) subsector.

1. Vested interests by political actors in the ASM subsector. At a point in time, it was announced that a good number out of some 500 seized excavators were missing. Linked to this incident was the arrest by the then New Patriotic Party central regional vice-chairman and five others in connection with missing excavators. An audio recording of the then IMCIM Chair and Minister for MESTI seeking to profit from the seizure of excavators and related allegations of conflict of interest went viral.

2. Absolving political appointees of Government. At a point in time, there was a bribery allegation against the then Secretary for IMCIM. He was subsequently cleared by the Criminal Investigations Department but the Office of the Special Prosecutor took an exception to his exoneration.

3. Excessive red tapes amongst state-owned oversight institutions. For instance, IMCIM virtually took over the regulatory and monitoring role of the Minerals Commission. Second, another layer of bureaucracy and role facsimile was witnessed when the GalamSTOP taskforce was formed in September 2019 to supplement the role of Operation Vanguard and IMCIM.

4. Lack or inadequate evidence-based alternative livelihoods solutions by government. Most alternative livelihoods are largely agrarian, short-term, and usually do not factor the role of women and children. Another policy failure is the use of security forces as a major intervention to fighting galamsey. This approach has proven to be unsustainable since 1989.

5. Inadequate political will by successive governments. For instance, a significant proportion of the miners trained and issued licenses after being vetted were alleged to be party members of the ruling government. Again, there was a lack of support by key ministries and departments like the Ministry of Environment, Science, Technology, Ministry of Information, Ministry for Water and Sanitation and IMCIM during CSO and Media led events [2]. The Multi-Sectoral Mining Integrated Project (MMIP) was watered down into a roadmap [3] . Most interventions have been cosmetic unlike the political will demonstrated in recovering the GH¢3.65 million (the expenditure portion of the annual budget funding amount allocation to roads and infrastructure ) spent on branding 116 Huanghai buses.

6. Weak oversight role of anti-corruption agencies like EOCO
Despite the above challenges some feats were chalked after reinvigorating the fight against Galamsey in the ASM subsector. First, a ban was placed on small scale mining in April 2017. Afterward, Operation Vanguard was launched on 31st July 2017 [8]. The security task force arrested more than 1000 illegal miners and had their equipment seized. Second, three of the five objectives of Citi FM’s #StopGalamseyNow campaign was achieved, except for land reclamation and ASM sub-sector recategorisation. That same month, the Judicial service announced the constitution of 14 specialised courts comprising seven high courts and seven circuit courts to deal with mining offences speedily. In 2018, the Inter-Ministerial Committee on Illegal Mining (IMCIM) was formed. IMCIM trained and vetted over 1000 miners to go back to work and launched a road map for lifting the ban. To support the fight, Parliament reviewed the Minerals and Mining Act 2006 to prescribe harsher punishment for offenders.

To conclude, if the aforementioned political economy- factors are not addressed by duty bearers, fighting illegals mining will just be a box-checking process.

The Author is an Energy, Extractives and Climate Finance Specialist.