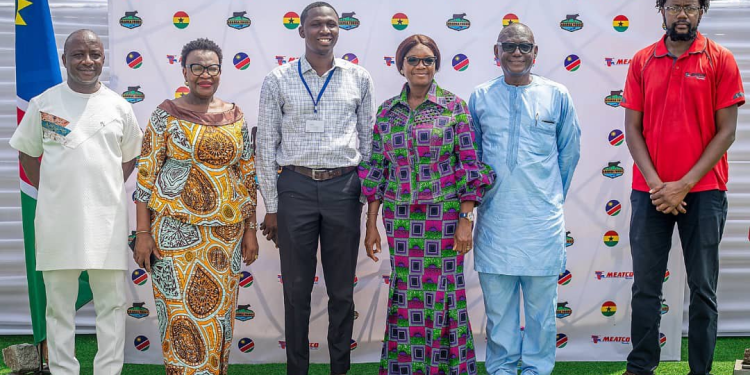 Abanga Farms & Food Systems Limited, a Ghanaian agricultural-based company, has taken delivery of the first consignment of top-quality beef from MEATCO, the Namibian meat producing and exporting company, to distribute in Ghana. It is the first of its kind between the SADC and ECOWAS regions.

At a ceremony on Wednesday, June 29, 2022, at the Tema Harbour, the Chief Executive Officer of Abanga Farms & Food Systems, Mr. Thomas Abanga hailed the partnership as forward-looking with the expectation that the benefits that would accrue to both Ghana and Namibia would be immense and long-term.

The partnership, he concluded, will strengthen the agriculture sector of both countries, particularly the livestock sub-sector whose true potential remains untapped in Ghana.

H.E. Madam Selma Ashipala-Musavyi, the High Commissioner of Namibia to Ghana, in opening remarks called on African countries to increase inter-trade within the continent still reeling from the impact of Covid-19 and the current Russia-Ukraine war. She noted that Africans would do well to consume what the continent produces and stop, depending on goods and products from outside the continent.

She expressed the hope that the partnership between Meatco and Abanga Farms & Food Systems would expand beyond Ghana and Namibia and move into other African markets.

She said she was particularly proud of the partnership because it fell in line with the economic diplomacy her President, H.E. Hage Geingob had charged her with when he gave her the commission to Ghana and was also reiterated by his Ghanaian counterpart when she presented her credentials.

Professor Bani, the Chairman of the Board of Directors of Abanga Farms and Food Systems thanked the management of Meatco “for having confidence in us to lead this process of inter-African trade.”

He also showed appreciation to the “High Commissioner of Namibia and her team for their untiring efforts to get this meat to Ghana” and assured that “Abanga Farms and Food Systems will take advantage of the provisions of the Permanent Joint Commission for Cooperation (PJCC) and its MOUs to expand trade and technology transfer between Namibia and Ghana… Trade between African Countries has the greatest potential for achieving sustainable economic growth and integration, and we must take advantage of it.”

Namibia is a major producer and exporter of beef and beef products like corned beef. It meets the rigorous requirements of Europe and America and has the certification to operate in the very demanding food industries of those markets. Namibian meat is also, crucially, halal compliant.

Relations between Ghana and Namibia go far back to the period of the liberation struggles of that country against European colonialists and Apartheid racism. The support of Ghana’s first president, who remains an icon to the people of Namibia, was pivotal in keeping the struggle alive.

Successive Ghanaian governments played their parts but it is the government of President Rawlings that took the lead in establishing diplomatic relations with Namibia in March 1999; but even with all that political will, people-to-people contacts and trade have been very minimal. The Abanga Farms & Food Systems and Meatco partnership may be the kind of initiative that would push the door to open wider for others to move in.

The Wednesday ceremony attracted officials from line ministries, bankers, restauranteurs, and the public.