Government is set to commence talks with the International Monetary Fund (IMF) for a bailout following severe challenges with Ghana’s economy.

This was announced in a statement issued by the Information Ministry today, Friday, July 1, 2022.

“The President of the Republic, Nana Addo Dankwa Akufo-Addo, has authorized Finance Minister Ken Ofori-Atta to commence formal engagements with the International Monetary Fund (IMF), inviting the Fund to support an economic program put together by the Government of Ghana.”

“This follows a telephone conversation between the President and the IMF Managing Director, Miss Kristalina Georgievs, conveying Ghana’s decision to engage with the Fund,” the statement noted.

The Information Ministry explained that this decision was taken at a meeting on June 30, 2022.

“The engagement with the IMF will seek to provide balance of payment support as part of a broader effort to quicken Ghana’s build back in the face of challenges induced by the Covid-19 pandemic and, recently, the Russia Ukraine crises.”

In dollar terms, the debt dropped by over $3 billion in the first 3 months of the year, from $58.4 billion in January to $55.1 billion in March.

Several efforts by the government including the introduction of the Electronic Transfer Levy (E-levy) to shore up enough revenue to salvage the worsening economic conditions haven’t yielded any positive results.

The Electronic Transfer Levy (E-levy) introduced by the government to generate additional cash for the government is raking in only 10% of the estimated revenue.

A leading member of the governing New Patriotic Party, Gabby Asare Otchere-Darko, earlier in the week announced that E-levy had performed poorly as it has generated only 10% of targeted revenue.

In a series of tweets, Mr. Otchere-Darko said the e-levy, since its implementation, has generated less than GH¢60 million instead of the expected GH¢600 million.

“After 5 months of stalemate and bashing, the e-levy, after implementation, is delivering only 10% of estimated revenues; our revenues remain very low as compared to the rest of the world; debt levels dangerously high, cedi, like most currencies, struggling against the US dollar,” he announced on Twitter.

Ghana officially exited an IMF programme which commenced in 2015 on April 2, 2019.

Under the Mahama administration, Ghana turned to the IMF in 2015 for an almost $1 billion extended credit-facility programme.

This was after years of overspending and a collapse in the value of the cedi, which caused Ghana’s debt to balloon.

Ghana is facing similar challenges, with a total public debt stock of GH¢391.9 billion as of the end of the first quarter of 2022.

This translates to a debt to GDP of 78 percent.

The cedi has also weakened 22 percent against the dollar this year, making it the worst-performing among African currencies.

Although the governing New Patriotic Party had said, that was the last time, Ghana was seeking an IMF bailout, current data compels the country to return to the Bretton Woods institution. 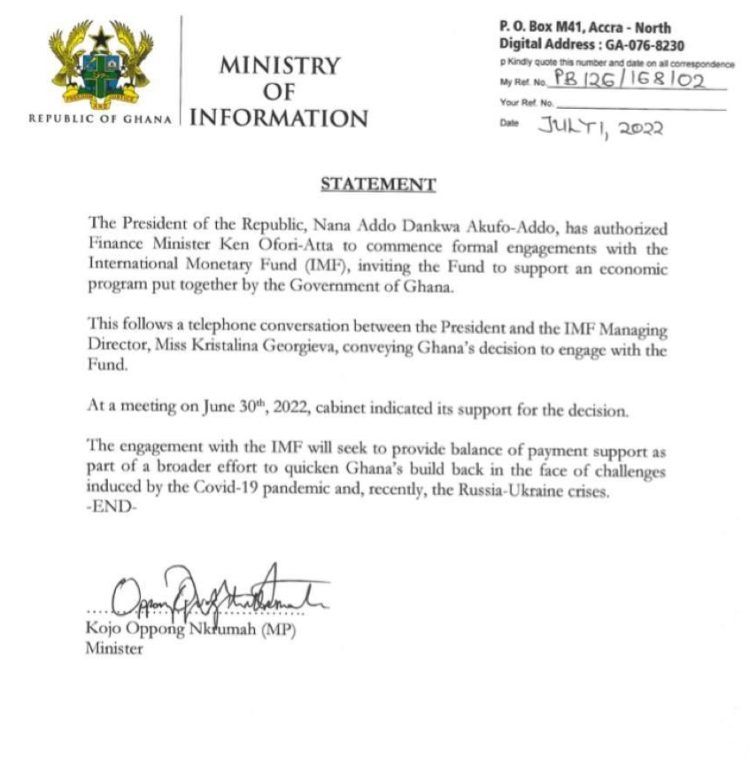