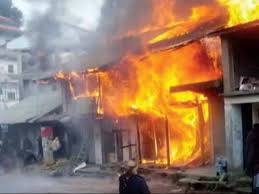 President of the association, Barrister Kenneth Ukaoha said in Abuja on Wednesday at the emergency meeting of the association that it is unbecoming as there were 16 fire incidents in 2016 alone including three in Kano which affected the Sabon Gari market one of the largest in Nigeria, two in Ibadan and another today in Ikom main market Calabar.

“Apart from loss of lives recorded goods and properties worth over N3 trillion lost, none of the affected markets have insurance coverage, about 85 percent of the fire incidents was said to have been caused by electricity and associated problems, only about 12 percent of the fire incidents attracted governments’ sympathy visits and of the promises made by the visiting government officials, only about three percent are kept. Yet traders in Nigeria contribute the nation’s second largest revenue base from import duties and sundry taxes/levies after oil,” Ukaoha said.

He added: “Most importantly, is that many lives have been irretrievably lost to market infernos with no serious investigation carried out at least to forestall further occurrences. These leave us to question the presence, the existence and the role of government. NANTS conducted a census and analysis of market fires across the country spanning over ten years.”

He said the most shameful and annoying finding is that Nigeria has had more market fires during the civilian rule than under the military regime, wondering if there are unseen hands of politics in many of the market fires, linked with political maneuvers and intrigues related to guise to construct more shops or stalls for the compensation of political supporters.

He said though the provisions of the Fourth Schedule of the 1999 Constitution of the Federal Republic of Nigeria, placed markets under the control of the Local Government Authorities, the federal government cannot sit by and watch the councils mismanaged the opportunities placed on them by the constitution and that the consequence of this neglect is Nigerian traders, and the nation’s economy losing over N5.3trn to market fires between May 1999 and March 2016.