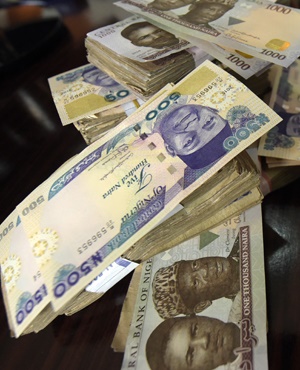 This picture taken on January 28, 2016 in Lagos shows naira banknotes, Nigeria's currency. Nigeria's central bank governor, Godwin Emefiele, on January 26 dismissed calls to devalue the naira in his monetary policy committee statement. Instead he chose to continue propping up the currency at 197-199 naira to the dollar and maintain foreign-exchange restrictions. As a result, the naira on the black market is hovering around a record low of 305, fuelling complaints from domestic and foreign businesses who can't access dollars required for imports. / AFP / PIUS UTOMI EKPEI

It is the latest announcement on the issue of remittance by the Nigerian National Petroleum Corporation (NNPC) in recent days. Last Monday the auditor-general said 3.2trn naira was not remitted in 2014, which NNPC later denied.

President Muhammadu Buhari took office in Nigeria last May, saying he would end corruption and mismanagement.

“Records at the Commission’s disposal indicate that between January 2011 and December 2015, the total indebtedness of NNPC to the Federation Account was 4.9trn naira,” said RMAFC, an independent body, in a statement.

Constitutionally, NNPC must hand over its oil revenue – which makes up about 70% of national income – and money is then paid back based on a budget approved by parliament. But the act establishing the state oil company allows it to cover costs before remitting funds to the government.

RMAFC said its figure for the money that had not been remitted “included NNPC’s claims for subsidy on petroleum products, crude and product losses, strategic reserves and the pipeline maintenance cost”.